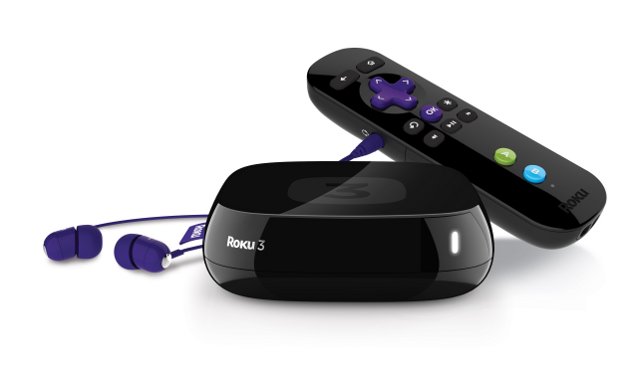 This is Part II of the Roku XDS review. Part I covered the functionality, operation and cost involved with the Roku box. In this continuation we examine content available on the Roku.

Our review will cover some of the more sought after and popular channels while touching on some of the specialized content that Roku offers. We will not be discussing every channel or content provider. We also will not be analyzing content provider agreements or content rights. Keep in mind, this is a review of content channels available via the Roku box. For the Roku box review please read Part I. This is not a support forum nor a help center, for information or assistance on your Roku box we direct you to the Roku forums.

Let’s start with some basics. The Roku Newscaster channel has a variety of options for catching up on current events. All network television news broadcasts are available including specialty news programs such as 60 minutes, Hardball, Nightline and others. Included in the Newscaster channel are sports broadcasts from ESPN with Mike and Mike, Pardon the Interuption and Around the Horn among others.  Additionally, BBC, Current TV, CSpan, PBS and other specialized channels are included via Roku Newscaster. 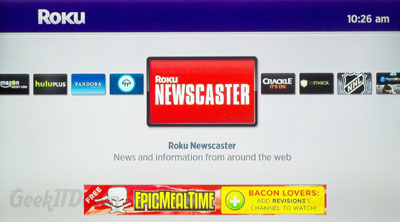 While news gets you up to date, most viewers are looking for entertainment. That is where the Roku really hits the mark. There is an enormous channel lineup for interests of all kinds, from movies and TV to netcasts, music and games.

One of the most popular channels is Netflix. If you are at all familiar with Netflix then you understand the benefit of a Netflix subscription. Netflix on the Roku is incredibly simple, which is a good thing. Netflix has basic genre categories to choose from and recommends additional suggestions based on your viewing patterns. There is a search area and instant queue for finding and saving shows of interest. The stream from the Netflix channel is fantastic. It is extremely rare to have any kind of interruption while viewing a program. The content selection is extensive and updates frequently with new movie releases and television shows. The Netflix channel itself is one the easiest to navigate with box cover images, title names, 5 star ranking system data and short blurbs describing each title. 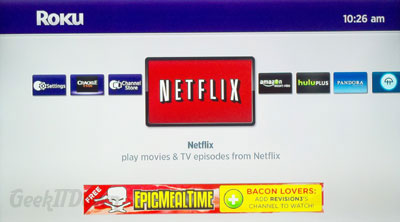 While Netflix has an overwhelming amount of content, there are some areas for improvement. Netflix needs to add more new and current releases for streaming to the Roku box. At this time, many of the more recent movie releases are DVD only which in many ways defeats the purpose of viewing them through the Roku. As with any content delivery issues, via streaming media, the responsibility falls on Netflix and to a greater extent the content rights owners to allow their media to stream. With that said, streaming content appears to be improving with expanded content and more frequent updates.

For movies, the choice is clearly Netflix. For television programs, Netflix offers old seasons but not current season episodes. That is where Hulu Plus comes in. Hulu Plus has current season episodes available and week by week programs so that you can stay current with your favorite shows. Hulu Plus also offers a variety of movies but for the most part viewers will access Hulu Plus for television programs. The Hulu Plus interface is attractive and easy on the eyes, there are a lot of different ways of finding programs and they have a ranking system similar to Netflix. The picture quality is good and without the jagged blips you may experience on a computer monitor. 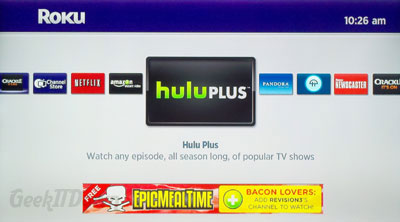 By and large, the Hulu Plus channel has the potential to be outstanding. Potential is one thing, success is another. The channel is way too complicated for the average TV viewer. The interface needs to be simplified. The absolute biggest disappointment with Hulu Plus is the content availability. Hulu Plus is a pay service and is intended to provide more content for the subscription. While they do offer more content, the content is limited as to where it’s viewable.

Many current television shows are now what Hulu Plus calls ‘web only’ which means you have to view them via your computer, thus defeating the purpose of the Hulu Plus channel on any device. Unfortunately, that trend has continued to increase as more shows move to ‘web only’ status. It is a huge problem that Hulu Plus needs to address. As it is now, we cannot recommend Hulu Plus as an acceptable alternative to broadcast television. Lastly, Hulu Plus continues to display ads during shows, which is exactly the same as traditional Hulu (free version) online. While we won’t debate the purpose of ads or Hulu Plus’ revenue streams, we will acknowledge the lag time during programs because of them. Additionally, video tends to freeze or become out of sync with the audio when the ads are accessed. It’s impossible to say with certainty that the ad placements cause the viewing problems, but generally speaking the video is fine until the ads are accessed.

Overall, we are disappointed with the Hulu Plus channel. It shows great promise but poor execution. It is obvious Hulu Plus has other priorities than to deliver the content they hold so dear. When they realign their priorities we expect a well developed and content filled channel which will be well worth the subscription fee.

Sports are one of the most sought after items on any viewing device, whether its the Roku box, cable TV, satellite or other media streaming device. The thing to remember is that sports are a business and as such it is their job to make money not necessarily bring you the games you want to see. Having said that, major sports are realizing the potential and benefit to streaming games. The NHL, NBA & MLB all have Roku channels. You still pay the subscription fee for their respective sports packages but now you can watch them via the Roku on your big screen flat panel television instead of a smaller computer monitor. The UFC also has a Roku channel which adds another option to the sports lineup. While none of these are perfect, you do get the same amount of games advertised by those sporting organizations (blackouts will still apply). 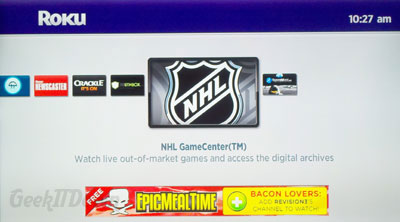 Sporting events are a tough nut to crack when it comes to having full and complete access, but progress is certainly being made. If you want more game options then let the sporting organizations know it. As for the other major sport, the NFL, they aren’t viewable on any media other than network television because that’s how they want it. Roku nor anyone else can ‘flip a switch’ to change that. However if you feel the NFL needs to have their content available on sources other than network television then you need to contact the NFL as they are the only ones who can change it.

Many viewers these days are interested in more than just movies and television. Podcasts or Netcasts are a great alternative to traditional television. Often listened to, more and more these specialty shows are adding video. Probably the most popular is the TWiT Network. Leo Laporte, one of the most respected names in tech journalism has created a haven for tech enthusiasts, geeks, nerds and those who are simply curious about technology. The TWiT channel has many of the popular netcasts in video form that listeners have grown to love, such as This Week in Tech (TWiT), This Week in Google (TWiG), Windows Weekly with Paul Thurott and many others. The channel is simple to navigate and we’ve noticed very few problems with streaming. 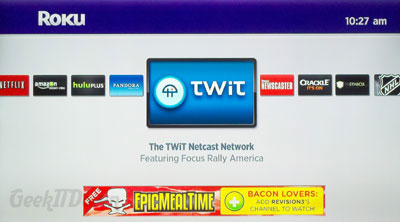 In addition to the TWiT network, CNET has their own channel which adds more technology access via the Roku box. Shows like Tekzilla, Buzz Report and Buzz Out Loud lead the lineup.

While we can’t cover every channel during this review, here are some other notable channel options: 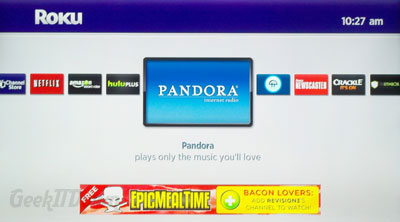 The Roku website provides a complete channel store lineup at http://www.roku.com/roku-channel-store.  There are many other channels that are not listed in the channel store and the lists update often. The XDS (model used in this review) is currently available at the Roku website, at BJ’s and at Amazon.com.  Since writing this review Roku has updated their models to the Roku 2.  The XDS we reviewed is comparable to the new Roku XS version shown below.

Are there any channels you prefer over others? Any experiences you’d like to share? Have questions on Roku content that we didn’t answer? Let us know with your comments!

If you enjoyed or found this article useful, please show us some support by liking us on Facebook, following us on Twitter or by sharing us on your favorite social website. Thanks!